Your cart is currently empty.

Where does coffee come from?

Consuming coffee has become much more that brewing a pot of department store coffee and pouring it in a travel mug for your commute to the office. For those that truly enjoy the coffee drinking experience, tasting coffee from different regions of the world can be an exciting experience. Coffee is grown all over the world, however, the regions most famous for their coffee beans are Papa New Guinea, Brazil, Honduras, Peru, Guatemala, Colombia, and Ethopia. These regions are located in what is called the "Bean Belt" where the growing elevations are 800-2200 meters above sea level and provide the best climate and soil for coffee production.

Where does coffee get its taste?

Coffee grown in a particular region will have unique characteristics based upon the soil type, climate, elevation, and harvesting practices. The soil chemistry, sunshine, precipitation, and altitude all have a direct effect on the taste and aroma of the coffee. Most of the world's gourmet coffee is grown on small farms that require a lot of manual labor to harvest the coffee beans. A coffee plant requires a certain climate to be able to grow and produce beans. Not only does the plant need fertile soil, it also requires adequate rain with reoccurring dry periods, sunny days with stable temperatures, and high altitude. All of these factors produce coffee beans that have flavors that are unique to the growing conditions.

Coffee from Papa New Guinea is grown mostly in the Eastern Highland Province. When coffee first was introduced to the region, beans from the Jamaican Blue Mountain coffee plants were used. The coffee is mostly harvested on small farms that can have as little as 20 coffee plants per plot. Most of the coffee grown in this region is certified as organic coffee. Gourmet coffee from Papa New Guinea has a distinct taste due to the nutrient rich soil from which it is harvested. It's tasting profile has citrus notes with chocolate and floral undertones.

Brazil is one of the world's largest producers and exporters of coffee beans. Brazil's tropical climate and vast rainforests make it an ideal region to grow and produce some of the finest coffee available. Brazil currently produces about 33% of the world's coffee supply. Coffee in Brazil is grown at high altitudes in the Parana and Sao Paulo regions. To continue the rich tradition of coffee growing in Brazil, the Brazil Specialty Coffee Association is a non-profit member association created to elevate the standards of excellence and enhance value in the production and marketing of Brazilian coffees.

Our gourmet single origin Brazil Santos coffee is grown at altitudes 750-1050 meters in a volcanic loam soil. This world famous gourmet coffee produces an elegant and smooth cup of coffee with hints of cocoa. The coffee beans are of the Catuai and Mundo Novo variety. Catuai beans are known for their sweet and bourbon flavor while the Mundo Novo beans has a low acid content and is very disease resistant. 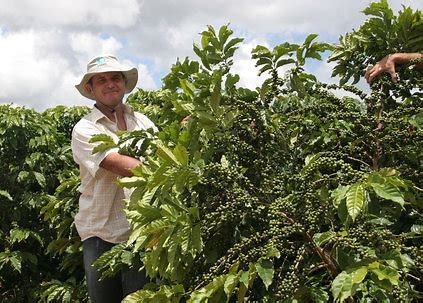 Colombia is considered to be one of the best growing regions of coffee in the world. Colombia is home to over 500,000 coffee farms, most of which are less than 5 hectares (<12 acres). Coffee from this region tends to be on the higher price scale due to its superior arabica beans that are harvested from small farms. The Federation Nacional de Cafeteros de Colombia was formed to work for the well-being of Colombian coffee growers through an effective union, democratic and representative organization.

Colombia was traditionally the second largest producer of coffee in the world, but now ranks third behind Brazil and Vietnam. Colombia is home to some of the most biologically diverse areas in the world which provides the rich soil to grow their delicious variety of arabica beans. Our single origin Colombia Coffee is a gourmet coffee that is sourced directly near Medellin in the Antioquia province of Colombia, South America. These rich beans offer hints of dried orange, berry, and chocolate, due to their growing conditions. The beans are grown on volcanic loam soil at altitudes of 4000-5000 ft.

Coffee from the country of Colombia is often regarded as the some of, if not the highest quality coffee in the world. Much of the country's coffee is grown in the Andes Mountains which has been considered at times to be the most diverse area on earth. This region of the Colombia Andes contains 1/6 of the world's plant species while only occupying 1% of it's land area. Do you love when your coffee has hints of spice and brown sugar? Then your next cup of gourmet coffee needs to be brewed with beans from Honduras. This Latin American country is home to about 10 million people and is about the size of Tennessee. As with other top coffee producing countries, Honduras is home to 100% arabica beans that are grown on land with rich soil in areas of high rain fall. Honduras is famous for growing very diverse flavors of coffee from its 6 distinct growing regions.

Due to the high amounts of rainfall in this region, it is often difficult to properly dry the arabica coffee beans after processing. Luckily, the IHCAFE (Instituto Hondureño del Café) has put significant effort into helping coffee producers find new and novel ways to dry the coffee beans and help prevent and stop disease from affecting the crops.

Inner Peak Coffee Company has a gourmet coffee that is sourced 100% from the La Paz region of Honduras. This single origin coffee is grown in a clay mineral soil at elevations of 4000-5500 feet. Our single origin Honduras coffee is a medium-dark roast and has hints of caramel, spice, and brown sugar.

Sign up for our IPC-Letter and get 10.0 % off for our premium gourmet coffee.